john parish and pj harvey have worked with linkous n the album It's a wonderful life back in 2000.
they 3 played live once...


Sophie Michalitsianos (Sol Seppy) played in Sparklehorse live shows in 1999-2001 .she recorded in Good Morning Spyder, Distorted Ghost, and It's a Wonderful Life
now she is married with Scott Minor ("the second Sparklehorse") who played on almost every Sparklehorse tour and album.

Sophie Michalitsianos, Wimbledon, London, England. A classically trained cellist and pianist, Michalitsianos grew up in both Australia and England and first began writing music at the age of just five years old. It was during her time in Australia that she was accepted into the Sydney Conservatorium of Music to study composition and orchestration. After graduating, her early career saw her working with a number of Australian bands as an improvisational cellist, but it was when she moved to New York at the age of 23 that she was approached by Sparklehorse’s Mark Linkous to join the band on tour. In time this led to her contributing to Good Morning Spider and It’s A Wonderful Life, assuming a prominent role in the band, providing vocals as well as playing bass guitar and cello.
After her time with Sparklehorse, Michalitsianos set up her own studio in upstate New York and began recording solo work. However, when a fire destroyed all her equipment and material, she started afresh and began creating what would become her debut solo release, The Bells Of 1 2. Signing to independent label Gronland under the more pronounceable pseudonym of Sol Seppy, her first single ‘Move’ was released in January 2006 and was followed by The Bells Of 1 2 in April of the same year. Taking two years to complete, the entire work was performed, engineered and produced by herself and was met with widespread critical acclaim. This engaging debut combined looping beats, piano and cello accompaniments with accomplished vocal melodies and lyrics. Fusing styles ranging from classical through to alt folk and electro pop, the album drew stylistic elements from acts including Björk and Sigur Rós. The stand-out tracks included ‘Come Running’ and the second single ‘Slo Fuzz’, which was released in May 2006.
2017


Emily Haines & The Soft Skeleton - Legend of the Wild Horse

Christian Fennesz and  Sparklehorse (aka Mark Linkous) recorded the album "In the Fishtank" in two days.

In those shows they played some of the last songs by Mark Linkous, still never realesed.

Johnny Hickman is guitarist, co-founder and co-songwriter of the band Cracker.

"Mr. Linkous decided he should go most folks gonna waste away real slow Now John Lee Hooker was a man I'd like to have known Lord, let me die in my sleep after a show"

JOHNNY CORDNER - Heaven And A Star

Singer songwriter Johnny Cordner performs one of his own self penned songs A Tribute To Sparkle Horse at the Open Mic night in Portadown 29th August 2012.

A Winged Victory for the Sullen is the name of an ambient music duo consisting of Dustin O'Halloran and Adam Wiltzie (who played guitar and keyboards in Sparklehorse during 2006/2007).

during the year 2009 Mark Linkous produced the album Pictures from home by Angela Faye Martin
he played in all the tracks.

she wrote this song for him, and dedicated her second album, Annyversary, recoded by Allan Weatherhead, with collaborations of Mark's brother Matt Linkous, and Melissa Moore. They 3 have also played live and recorded with Sparklehorse.
Matt Linkous and Melissa Moore also have a music project named The Rabbit, with several songs recorded with Mark.

Swifts and Swallows was written in memory of Mark Linkous, with love and admiration. Posted on the anniversary of his passing, March 6, 2011.

Swifts and Swallows Irwin Street End of winter
You shoved away, boot sole and cinder
We kicked the campfire  Walked the mountain down We got the call
You took your guns to town You shoved away, all soot and boot sole today
Said you were okay Isn't that what we're supposed to say
You said that you were okay But not today Lay a track down and we'll go see Tom
Here comes a girl singer But I like the song I'll make the coffee If you take the clip out
You say your sorry
Let's take the bike out Swifts and swallows arrive on Hall of Fame Were met by tribes of birds saying
Things are not the same Since the branches spelled your name ...on the sky

the band toured with Sparklehorse during the Dreamt for lightyears... tour.

You dream the birds of Passerine Where night calls past, every day serene You're free from the muck caught in the mire Born of light, stillborn of desire Some, some, they get away While others they find the will to stay And some thrive but are left unsatisfied The world won't let you go, no, the world won't let you go And still we had to cry For the space you occupied﻿


again polliwog - Caught up in

This is our first song, and video on Youtube. It's in many ways inspired by, and somewhat of a tribute to Mark Linkous aka. Sparklehorse. You can also check out our not so awsome but very awsome website: http://www.againpolliwog.com

Long Desert Cowboy - 04 - Mark Linkous (from "Symphony of the Deceased")

this one was posted in youtube 5 days afeter Mark's passing


I was upset to hear on 7 March 2010, that Mark Linkous had taken his life the day before. This is the very rough "demo" that resulted. I may re-record for a proper release someday, but this is raw. This is inspired. It's what I'm sure many of his family, friends, and fans are saying themselves right now. If you'd like to download this song, it's yours. I uploaded it here: http://www.mediafire.com/?mlmqy2nurxx Everything that's made is made to decay But why now? And why this way? Could you see the light we saw inside you? Did it all become too much for you? Your broken gifts repaired broken hearts A soundtrack to life that hit like velveteen darts And you decide that your work here is done And you set yourself free beyond the moon and the sun Now there's an empty stable We'll hold it for you as long as we're able So sad that you weren't stronger Wish that you could have stayed longer We all want to know why And we'll think of you when we look to the sky One last horseback ride Before you gallup off to the other side Goodbye...

Daniel playing one of the songs they recorded togheter, a month after Mark's dead

everything in it right place 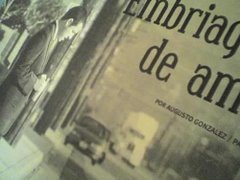